Wish You Didn't Have to Go

December 2012 Reverb Broads
Prompt 2 - What is your strongest memory tied to music?
Suggested by Sarah


The first time I realized that music could speak lyrics was while learning "Octopus's Garden" in elementary school.  Standing in the music room, staring into the back of the upright piano, I heard the words coming forth from chords Mrs. S. was playing. I was relieved, I had forgotten some of the lyrics, but the piano knew what they were and was able to tell me.

Do you remember the first time you realized you were (nudge, nudge, wink, wink) attracted to someone?  When you realized what thinking someone was "hot" really meant? For me, I can't tell you what he looked like, but I can tell you that I still get a little warm under the collar every time I hear the Red Hot Chili Peppers "Under the Bridge" because that was the song that was playing when I was hit with that realization.

But the strongest memories I have of music involve my dad.  Growing up I spent a lot of time with him in the barn and he shared with me some of his favorite songs.  To this day, I can't hear a Roy Orbison song without hearing his shout of, "It's Roy." I'm not sure why that was one of his quirks, but it was.  This past summer, to help him recuperate from his open-heart surgery, I put together a play list of some of his favorites and a couple of mine.  The lead off song was "A Summer Song" by Chad and Jeremy.

December 2012 Reverb Broads
Prompt 1 - What is your favorite place in the world? What makes it so special?
Suggested by Kate


Right now, my favorite place in the world is the second-hand futon we bought from a yarn store classmate over the summer.  It's a great place to sit, read, drink coffee, knit, and hang out with the dog. 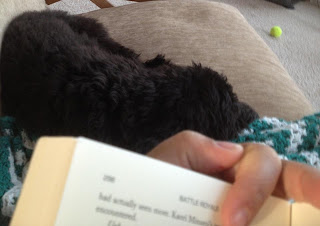 I'm a homebody.  I love the fact that the futon is in our living room, a room with two walls of two-story windows. It's sunny, bright, and with the right turn of the head looks out over a house-less wetland surrounded by trees. It's simple and comfortable. It's one of those places that makes my body relax as soon as I get a chance to enjoy it.
Posted by AmyK at 8:56 PM No comments:

December 2012  Reverb Broads
Prompt 5
What is your all-time favorite work of art/film/musician/book and why?
Suggested by Dana

For me, without a doubt, it is Margaret Atwood's The Handmaid's Tale

It is beautifully written and frightens me in so many ways. There are certain books I read and read and then read again because they evoke specific emotional responses and this is one of them. I read it when I want to be frightened and when I need to remind myself what a tenuous hold we have, not only on women's rights, but on human rights as a whole.

The book was originally published in 1985, before the daily use of debit cards to buy everyday items, few jobs included hours spent in front of computers, and where the idea that CFCs could destroy the atmosphere seemed just as unlikely as the society Atwood describes in her book. Twenty-seven years later, when I find myself destitute when I don't have my credit card, and find it hard to function (shop, get directions, find any sort of information) without some sort of computing device readily available, and weather extremes caused by global warming are becoming common place, it seems that Atwood's Gilead, a world where a damaged environment and religious zeal in combination with a declining birth rate to legitimizes a totalitarian society.

We Americans are taught to fear Sharia law, but Atwood's Biblically-derived dystopia is more frightening to me. Using the Genesis example of Jacob and Rachel using the slave Bilhah as a carrier of their child, the government of Gilead has created a gender- and social-stratified society where "immoral," but fertile women are trained (brainwashed, drugged, and/or threatened?) and then dispensed to powerful men for the purpose of gestating and delivering their offspring. The government took from these women their bodies, their bodies that they thought of as ". . . as an instrument, of pleasure, or of a means of transportation, or an implement for the accomplishment of my (their) will." It is not only the immoral women who have been forced into a limited role, but also the wives of powerful men, "orphaned" offspring, and members of the working poor.

The truly frightening thing is how complicit I fear I would be in the development of Gilead. "We lived, as usual, by ignoring. Ignoring isn't the same as ignorance, you have to work at it." If, like the book's narrator, I was fired from my job and prevented from using my own money, would I chose to ignore what was happening around me? Maybe willing to jump on someone else's wagon, but not brave enough to hitch up the horses and take the reins myself? Would I allow my husband, my father, or my brother to now be my guardian, my patron, my only connection to society? Would I be strong enough to fight against this? Would the men in my life? Or would they sit back, perhaps even slightly delighted that once again, they get to be the ones who make the choices, fulfill the decisions? Would I give my consent to the activities around me? Would "I've leaned forward to touch the rope in front of me, in time with the others, both hands on it, the rope hairy, sticky with tar in the hot sun, then placed my hand on my heart to show my unity with the Salvagers and my consent, and my complicity in the death of this woman." Would I yield to the new world order?

The fact is, I'm usual. I ignore. Oh, I'm outraged at being called a slut because I feel my health insurance should cover the costs of my reproductive stability. Or that I should have to prove I need birth control pills, not to prevent pregnancy, but to prevent the chronic pain that comes with my endometriosis*.  Rape is rape, it is not legitimate, or forcible, and no benevolent god would wish it on any person. Yet, there are men and women in our current world who believe that a woman's place is in the home, barefoot and pregnant as many times as possible. It makes me scream to hear the beliefs spouted by so-called moral zealots.

But what do I do about it? Write some words for my handful of readers to ponder? I may be protesting, but my audience is small. "Dear You, I'll say. Just you, without a name. Attaching a name attaches you to the world of fact, which is riskier, more hazardous: who knows what the chances are out there, of survival, yours? I will say you, you, like an old love song. You can mean more than one." And in writing my words I'll allow you to remain anonymous. Other than the tick mark on my blog counter, I'll never know you were here. Will these words, these questions be enough to disturb the forces around me? "There is something powerful in the whispering of obscenities, about those in power. There's something delightful about it, something naughty, secretive, forbidden, thrilling. It's like a spell, of sorts. It deflates them, reduces them to the common denominator where they can be dealt with."

I'm scared that I wouldn't be able to do anything. I'm scared the words I write here will disappear. I fear that religious bigots, those who feel they are in the right, will take the rights and freedoms of some, and continue to take and take until Gilead is a reality.

So, The Handmaid's Tale is my favorite book because it forces me to evaluate my own role in society.

*Or even, now that I've checked the spelling of "endometriosis" that Google's dictionary doesn't recognize it as a word.
Posted by AmyK at 7:26 PM No comments: