For well over a year now, my husband and I have alternated responsibility for meals by week.  It's great.  Every other week I don't have to plan meals, go grocery shopping, or do much cooking.  It's wonderful.  We recently decided that we each need to expand our cooking repertoires and that we should to attempt to try one new recipe a week. 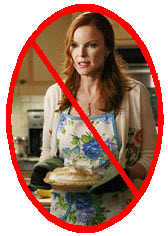 Alas and alack, it's my week.  And like every other week, I am not in the mood to figure out what we're going to eat this week or go to the grocery store.  In fact, today I've taken two naps (one intentional, one not so much), done some reading (The first third of The Immortal Life of Henrietta Lacks has been amazing), watched an episode of Desperate Housewives, and all and all pretty much been a complete slut.  No, not that kind of slut.  This kind of slut:  When this woman answers the door, she shrugs without remorse at her unkempt apartment and declares, "I''m such a slut" (Kingsolver, Barbara. High Tide in Tucson).


And while even on my best days I will never be Bree Van de Kamp*, I usually try to take the extra time available on the weekend to make meals that require a little more effort. Yesterday I made blueberry muffins** for breakfast and oven-friend chicken for dinner.  Not so much today. Today, I went so far to threaten a dinner of pasta and sauce from a jar.


But even I wanted something more elaborate than jarred spaghetti sauce, so I pulled the some ground pork, ground beef, and ground chicken from the freezer and decided to concoct a meat sauce based on the recipe for the Simplified Lasagna Bolognese from Cooks Illustrated: More Best Recipes cookbook.  Basically, I put in twice as much pork as the recipe called for, swapped the veal for chicken, added garlic, oregano, and basil.  Served it up with some whole wheat thin spaghetti, salad, and bread.


I don't know if that necessarily counts as a new recipe given that I've made the lasagna before, but hey, at least it didn't come out of a jar. Which is good. I'll need that jar of pasta sauce for Wednesday or Thursday's dinner.

December 8 – Beautifully Different. Think about what makes you different and what you do that lights people up. Reflect on all the things that make you different – you’ll find they’re what make you beautiful. (Author: Karen Walrond)


I admit it, I have an odd sense of humor.

You know that one person heard laughing by herself in the movie theater?  Yep, that’s me. I find things funny that no one else does. This used to bother me, but long ago a former boss shared this nugget his buddy shared with him.   “My sense of humor is just for me.  If anyone else laughs, that’s just gravy.”


I was reminded how my sense of humor seems to differ from the masses during President Obama's State of the Union Speech.  The president was discussing ways to reduce the federal debt, while cautioning against making changes  without careful consideration.

"Cutting the deficit by gutting our investments in innovation and education is like lightening an overloaded airplane by removing its engine.  It may make you feel like you’re flying high at first, but it won’t take long before you feel the impact."


I howled with laughter.  Who would have thought the president include such a horrible joke in such a serious setting?  And then I laughed even harder because the audience was dead silent.   Were they also all in shock? Did they get it?


Now, this is certainly not the only time I've been the only one in the room to laugh at something on-screen.
Remember in Ocean's Eleven when Don Cheadle's character, Basher, is completely enthralled with the television news report of the hotel implosion and the hotel is actually imploding in the window behind him?  I thought that was funny.  Here, the guy could see it actually happening and he's glued to his television.  I was the only one in the theater who laughed.


Personally, I think one of the most beautiful things in the world is a person who is laughing from joy or benign amusement. I'm not talking about someone who's laughing at the groin shots on America's Funniest Home Videos. Or Stewart/Colbert/Leno/Letterman when they're being malicious.  It may be funny, but it's also malicious.    I'm talking about harmless laughter and appreciative humor.


I think I have a beautiful sense of humor.


So, I'll leave you with this.

Q: Why do ducks have flat feet?
A: For stomping out forest fires

Q: Why do elephants have flat feet?
A: For stomping out burning ducks.


I just set myself into a fit of laughter.  I need to go find some Kleenex to wipe the tears from my eyes.

A Cat Named Frank - A novel by... I still plan on writing you.  I still don't know what you're going to be about.


On the other hand, I have figured out what to make this blog about.  I'm known to be a little blunt, even overly frank about things. This blog, while not necessarily long on opinion per se, will be about about the things that deserve frank and open discussion and evaluation, regardless of how mundane they may be.


The purpose of this blog: develop a community of book readers by forcing myself to read and analyze more classics and non-fiction while still reading lots and lots of brain candy; write about the wonder of words and language; share kitchen creations and catastrophes - mine, my husband's, and restaurant's;  marvel on the power of words; delve into the things that make a life well lived; ponder the things that make me laugh; and maybe test some of my own fiction. Oh, and spreadsheets.  There's a chance I might talk about spreadsheets.  Cuz I like them.  A lot.  So much that  Emily gave me a mug to proclaim my esteem for spreadsheets. 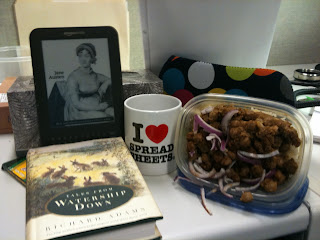