To Be Perfectly Frank Has Moved!

It's only taken me almost five months to have Jon enter his username and password on the site he used to buy my Christmas present domain name and me to make the two mouse-clicks to move it.  Sigh.  Perhaps had I known it was that easy.  Anyway, update your bookmarks; www.2bperfectlyfrank.com is up and running (or should be by 10 Monday morning--the internet can't always be depended on for immediately performing tasks.  I know, I know)

There Are Such Things as Hummingbird Moths
Last weekend, while working on the garden, I noticed a hummingbird in the lilac bush.  Now, I have to tell you, I was little confused.  First of all, lilacs don't seem like the sort of big red flowers that hummingbirds tend to visit. I don't know about you, but I think of hummingbirds as mid- to late-summer sort of birds, you know, the season when there tends to be a lot of big red flowers around.  Also, this bird seemed to have muted colors when compared to the images in my head. Not to mention that they are called humming birds for a reason, this thing didn't seem to make much noise.   When closer inspection revealed antennae and that the creature looked for all the world like a flying brown shrimp, I did begin to suspect my earlier identification. The moth hung around long enough that Jon was able to go get his camera and get a decent picture.

See the long tongue thing coming out of its "beak"?

Well, it does a crazy curly thing like this.

So, it turns out that the humming bird is actually a moth, likely a Hyles lineate.


Oh, and if you did know there was such a thing as a hummingbird moth, please take into account this equation about knowing things from XKCD. Don't forget to read the hover text.

We Have Barred Owls
Moths and other insects aren't the only flying critters we have around here.  Our windows look out over a semi-wooded wetland which makes for some great bird watching. We see ducks, geese, bats, mosquitoes, red-tailed and sharp-shinned hawks, bald eagles, blue herons, and lots of lots of other creatures.  One of our favorites has been Willhelm, a barred owl (a.k.a Eight Hooter, Rain Owl, Wood Owl, and Striped Owl, but is probably best known as the Hoot Owl based on its call).  And since barred sounds like bard and William Shakespeare was the Bard of Avon, the owl became Willhelm (with a German accent and pronunciation, of course, because that's just a lot more fun to say). Willhelm has a lady friend, Emily (Dickinson, poet and using the definition that a bard is any poet, the name follows the theme). Or perhaps Willhelm is Emily and Emily is Willhelm.  I don't really know.  There are two of them, we've never managed to a get a good picture of the both of them.  Jon has managed to get some great pictures of Willhelm though. 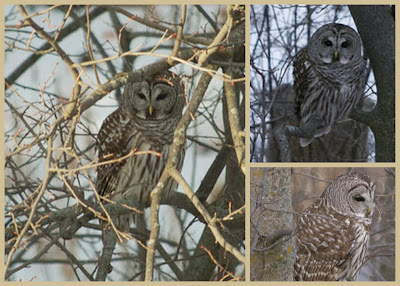 We haven't seen them much of late, mostly we just hear them, "Hoot, hoot, hoo, hoo.  Hoot, Hoot Hoo Ooo."

We Also Have a Library (and an office)
As a lover of books, the idea of having my own personal library has long been a dream.  When we were looking for a house, one of the things I wanted to find was a house with a library.  As it turns out, we fell in love with a house that didn't have a library (it's all about the windows), but had the potential to contain a library.  And now it does.  With fiction alphabetized by author and non-fiction grouped into categories and then alpha-by author or editor.  Contrary to others' beliefs my method of organization is perfectly acceptable nor does the room need to be messier so that it's calmer.  It's calming and pleasing just the way it is.  And hopefully, after next weekend the window seat will have a calming and pleasing custom-made cushion. 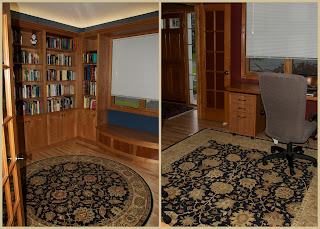