I saw the following in Gantthead Lite, a project management newsletter, in early March.

March is the month that God designed to show those who don't drink what a hangover is like.
Garrison Keillor
I forwarded it on to my parents who responded with "Amen to that" and an "I believe that is true."  A couple of weeks ago I saw it again as a trail of stolen status updates on Facebook.  To me that seems like evidence of the ubiquity of the sentiment.
And how true it is.  By March 18 it seemed that Spring might finally be making its way to Minnesota.  We could see and use the grill, snow had started to melt, and new growth was visible.

And then it snowed.  Again.
It seems like, in March, as soon as it seems like spring might be arriving, Mother Nature reminds us who the boss really is.  March even seems to smell like a hangover.  There's something in the smell of melting snow that's reminiscent of one's mouth the morning after over-consuming cheap booze. All the litter that appears as the mounds of snow melt, simpy further reminders of fun that might have been had the night before, but now seem like festering blots on the landscape.

Now April is here and like that long, hot morning-after shower, its winds and thunderstorms purge and freshen the landscape.  No longer does the outside smell like the ice from the back of a freezer; sunny days bring forth the smell of fresh grass.

Right now the smell of tornado season is in the air.  Not that we're in the middle of any severe weather, but the air has that heavy, damp, changeable feel to it that precedes a boisterous thunderstorm.  The birds, at times deafening in their courting and territorial calls, are silent.  The warm sun has slid behind darkening clouds and the breeze that earlier was wafting through the screens carrying the scent of warm grass has turned into a cold wind  cruelly throwing tree buds against the windows of our house.

Tonight's likely thunderstorm is welcome.  It will wash away the last dregs of snow, make the grass even greener, and force the tree buds to the point of exploding. Like brushing one's teeth the morning after, April storms purify and refresh.

It's April, and Spring is well and truly here.


The crocuses have flowered, 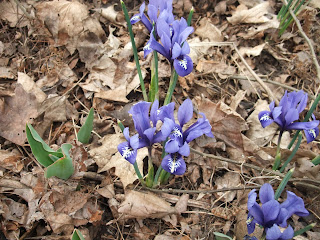 The hyacinths are preparing to bloom, 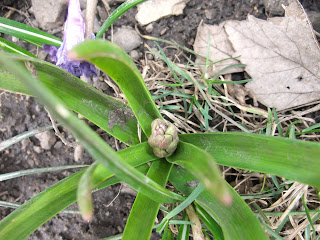 And the spunky rhubarb leaves are unfurling from the dirt. 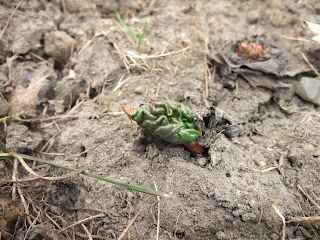