There is a sense of freedom and power I get from riding a bicycle. From that first banana seat bike to my current road bike, I love that feeling of first taking off; right foot on the pedal, pushing off with the left, and starting to fly.

To some extent I still feel like Jennifer Weiner's Candace Shapiro.  "When I was eight* I learned to ride a bike.  And this, too, opened my eyes to a new world that I could explore on my own...".

Of course it was a limited world. Not limited by the vagaries of small town or suburban boundaries, but limited to the rideable places on the farm and by the arbitrary borders set by my parents.

There is a paved quarter-mile lane leading down to the farm.  We (my brother and I) were allowed to ride about half-way up the lane by ourselves.  Eventually the border was extended to the full length of the lane (I'm guessing so that getting the mail could be added to our list of chores), but no further without escort.  We could also ride around the buildings and out to the back fields on the gravel lanes.

And ride I did.  Up the lane, down the lane, up the lane, down the lane.  Again and again and again and again. Slaloming around the dirt clods left by tractor tires.  "Racing" my motorcycle-mounted cousin as he left for the day.  Chasing gophers, imaginary armies, and herds of fantasy animals. Whirling by the red machine shed, around past the big corn crib, back towards the white machine shed and around again in my own little velodrome. Pedaling down the back lane to deliver newspaper-wrapped Pepsis and bags of Oreos to my dad and grandpa working in the fields. Pedaling up the lane to put the out-going mail in the box and up the lane again to get the mail after it had been delivered.
A bicycle was also the first major purchase I made with my hard-earned allowance money. For weeks (ages and ages it seemed)  I watched my savings balance slowly increase as I saved up for a new 10-speed.  I don't remember too much about the shopping experience, but I do remember being told it was more important to buy a "quality" bike, rather than a "pretty" bike.  And so I ended up with a black bike rather than the pink and gray*** one I had yearned for at ShopKo.
Riding a bike has always been a way for me to escape and to feel empowered by my own abilities.  I have never been nor will I ever be an athlete, but I usually feel strong, athletic, and sure of myself on bike.  Well, except for when I'm dying biking up a hill, but the sense of success of having made it is totally worth it.

Sadly, I have been let down by bikes and my own clumsiness on more than one occasion.  I'm not talking about the normal spills of bike riding, but the bone-breaking splats of the truly graceless.

The summer after third grade, newly freed from the wrist splint I had been trapped in after falling from the monkey bars and breaking my arm near my wrist, I went racing up the lane on one of my parents'  too-big-for me-and-therefore-more-fun-to-ride bikes, accidentally hit the front brakes, and went head over heels into the ditch, and broke my arm again.  Truly, it takes a talented third-grader to break their own arm twice, in two different spots, within three months. 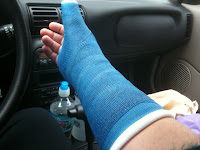 And now, this week I have done it again.  Proudly setting off on my new bike I managed to ride for three whole (city) blocks before I shifted the wrong way while going up a hill, fell over, and in the process of landing I broke my thumb.  But hey, at least I got a pretty blue cast out of it.

Still, my faith in the power of riding is undaunted. Once the pain goes away and the thumb is healed I will be back on the road.  I may no longer race against motorcycles or  chase herds of unicorns, but you can bet I'll be out there again, flying down the road on two wheels, slaloming between the dirt clods left on the road by the construction equipment.
________

*Well, actually I must have been six or seven
**I don't  have any pictures of Betsy, but here are pictures of Kate, Skip, and Pete because who doesn't like pictures of happy  dogs.


***I would like to hereby thank my parents for not letting me get what I now think would have been a horribly ugly bike and for teaching me the value of buying for quality.
Posted by AmyK at 5:53 PM