June 2 - Reverb Broads
What gives you nightmares?
Suggested by Kassie 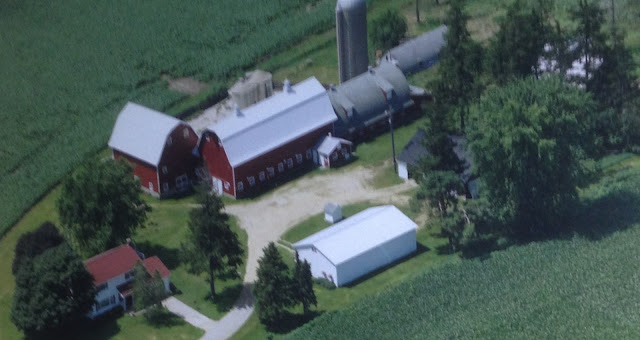 This is where I grew up. This where my dad grew up.  This where his dad started working in the 1930s. It's mostly white-trimmed red buildings and a red-trimmed white farm house; it's a dairy farm in southern Wisconsin.


I was a farm kid.  I fed calves, milked cows, scrubbed the bulk tank, swept the feed alleys, and all sorts of other chores.  It was my identity. It was who I was.  Who my parents and my brother were. Who my aunt, uncles, and grandparents were. Just so you know, that's not the nightmare part


It pretty much stayed that way until I was 20 or so. Now, realize, by this point I was a junior in at a college in Chicago.  I had no intention of going back to the farm.  That was not who I was or wanted to be.  But it was part of my identity.  A HUGE part of my identity.  In fact, really it was the only way I knew how to identify myself.


Then, one afternoon I got a phone call from my parents.  They were going to sell the cows in June and the machinery the following January.  They weren't moving, they were just going to stop being dairy farmers.  No more cows. No more working the fields themselves; they would rent out the land to other farmers.  My mom had already started working off the farm.  My dad was going to get a job. I was devastated.  My friends still laugh at how I came into their dorm room with tears streaming down my face. They thought someone had died. What I couldn't explain to them is that someone had. Part of me had. This is still not the nightmare part.


It's been over 16 years since that fateful day. Since that phone call, I have never been home again when my parents were farming.  They've made a wonderful life for themselves. They have become something in addition to what they were. And nope, still not the nightmare part.


I have these dreams where I have to go back home.  My parents have decided that getting back into the dairy business is a good idea. I have to help.  In the dream from just a couple of nights ago my mom and I milking.  The cows keep popping their heads out of the stanchions and are attempting to walk out the east doors of the barn into some bright morning sunlight.  The cows are between me and the open door.  I attempt to sneak ahead of them to close the door, but only succeed in scaring more cows out of their stanchions and chasing them cows out the door.  There is yelling and anger. There are cows all over the yard and it is impossible to corral them.  There is the part of me that can't understand why in the bleepity bleep bleep BLEEP! we are milking cows again.  Even if it's just for a month or two to get some extra cash. And of course, nothing is going right.


That's the nightmare part; something that I thought was gone comes back and haunts me. I have absolutely no control over the situation.  The life I have built for myself irrelevant is in the face of milking the damn cows again. It is so painful and so stressful. Unlike the dreams where I've skipped class all term and it's time for the final or I show up someplace naked or partially dressed I can't find resolution in the farm dreams. That's the nightmare.