We the People, not We the Dollars

June 5 - Reverb Broads
Come up with a new Constitutional Amendment.
From the book Art and Soul 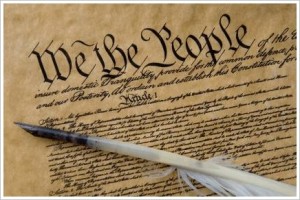 The United States of America is a remarkable place.  Over two hundred years ago a group of men were able to sit down and create the framework for governing that is still followed today.  In the subsequent years, the document has been amended to clarify and further the rights of the citizens. In general, the amendments do not restrict the rights of persons. Instead amendments to the Constitution of the United States provide more emphasis to those rights that should be innate, but that power and societal norms had previously suppressed.

With this in mind it seems that amendments, like that on Minnesota's November  ballot* should be defeated.  Amendments that limit the rights and responsibilities of people should not be. Period. Amendments should exist to further protect ALL people.
It seems that both the federal and state governments have moved away from one that is "of the people, by the people, and for the people." It seems that it has become one that is "of the money, by the money, for the money." Money is the power and influence in politics.  Political decisions are made not in the best interests of the constituents, but in the best interests of those who have the the most money.

Perhaps the remedy is somewhere in campaign and political finance reform.

And only human citizens.  Not corporate ones.  In the spirit of secret balloting and to limit the power of influence, contributions MUST be anonymous.

Any entity (person, religious group, corporation, non-profit, small-business, etc.) may make contributions towards educating the populous regarding an issue before the government.


Any person or thing can fund the issues, however it must be in the form of educational advertisement and subject to a bare minimum of journalistic integrity.  No contributor may be anonymous. With regard to the issues, one must be able to put their "face" with their money.

Are these likely to be successful? No. One could quite easily make the argument that this limits freedom of speech.

If successful, would they make a difference? Who knows.  Still the idea of returning money to commerce and away from political influence seems like a good idea.

Another possibility is declaring that corporations do not have the same rights to as individuals.  Ideally politics should be separate from the influence of money.  I know that's a pipe dream.  In a world where buying some pizzas for the manufacturing staff also buys "loyalty" to a freight company, it is foolish to think that money can only be commercial and power only be political.  But it is wonderful to dream that we and our politicians would make decisions based on the best interests of all and only those involved.

___________
*The question on the ballot is "Shall the Minnesota Constitution be amended to provide that only a union of one man and one woman shall be valid or recognized as a marriage in Minnesota?"

For the record, this amendment must be defeated. Regardless of one's opinion of gay marriage, this is an amendment that interferes with the daily lives of good, hard-working, society-benefitting citizens of the state of Minnesota and the United States of America. This is an amendment that restricts the rights of all people. If you are a  Minnesota voter - Pledge to Vote "No"!
Posted by AmyK at 2:11 PM